How can you get the marine demon bothering you to tap out and leave you alone? Is there a way to immerse that thing in water like a good ole Baptist and get it to tap out? Apostle Jennifer LeClaire has an upcoming course with spiritual hacks on how to apparently drown marine demons.

Everyday people are feeling the effects of unseen evil forces, and yet, they don’t know what’s attacking them, let alone how to have victory.

While many spiritual warriors are familiar with principalities and powers like Jezebel and witchcraft, few have heard of marine demons. Also called “water spirits,” these powers wreak havoc in places near bodies of water. From Python, to Leviathan, to Merman to Rahab and beyond, spiritual warriors are feeling the effects of water spirits but often don’t know how to combat these evil forces.

Bestselling author, Jennifer LeClaire equips you to prophetically recognize these spirits and engage in victorious warfare against them in this spiritual warfare intensive.

All students will receive a discount code for the new book: The Spiritual Warrior’s Guide to Defeating Water Spirits.

Discern the presence of these water spirits and become equipped with spiritual warfare strategies to defeat them!

Her course is associated with her new book Defeating Water Spirits. 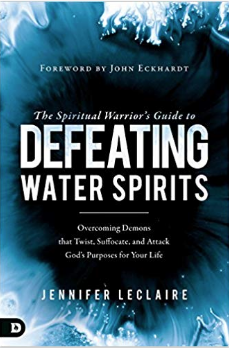 This is all a product of LeClaire’s depraved creative imagination she uses to make money. She’s been caught before using less than ethical tactics to grub for money.

Pay the Price for a Ministry and Anointing Says Jennifer LeClaire

Need Boldness? Get It by Sending Me Money Says Apostle Jennifer LeClaire

Thanks to Church Watch Central for the heads up on this.